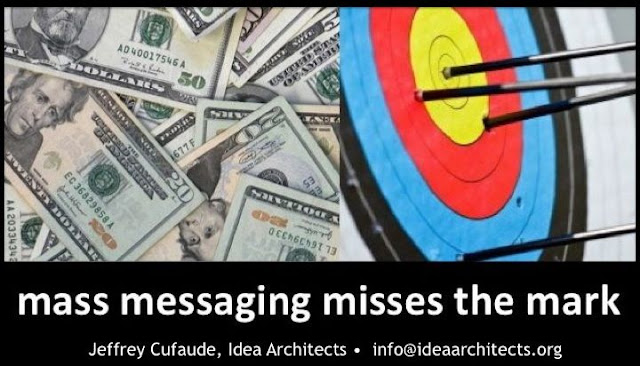 I am always thankful to get past December 31 of any year. It's not because I hate New Year's celebrations or all the talk about a clean slate, making resolutions, or starting a diet.

January 1 means we have 360 days or so until charities and other nonprofits send out their well-intentioned, but often underwhelming last minute year-end solicitations.

If you want to make a new year's resolution that may help with your friend-raising or fundraising, let me suggest a simple one: stop using mass messaging that treats all recipients the same.

In a four-hour span one day I received emails from four organizations I support asking me to make a donation before year's end.  Earlier in the year, I had already made contributions ranging from $100-$250 and I have given annually to three of the groups for multiple years.
So of these four, two were what I call fundraising spam: generic, impersonal, reflecting little thought.  I dismissed them outright. Two were strong examples of fundraising storytelling.  But those two excellent examples were undermined a bit by a simple mistake they shared with the two weak appeals. And it is a mistake that occurs all too regularly throughout the year, not just at crunch time.

What was it?  They failed to treat current year existing donors with any more personalization or attention than everyone else on the distribution list.  While not a fundraising felony, it certainly falls into the category of an avoidable error.

Here's what I'm talking about: in three of the four emails after the ask was actually made, a comment along the lines of "thanks to those of you who have already made a gift" was then noted.  The fourth email didn't even bother to do that.

At its most basic, when we do this we treat current supporters and their contributions as an afterthought: Oh yeah, thanks for that gift earlier in the year.  Don't ever make donors an afterthought if you want them to keep thinking about you.

So here's the oh-so simple way to avoid doing this again next year.  It's Fundraising 101 that often doesn't occur because of lack of staff time, training, or advance planning of donor communications.
That's it. That simple shift requires about 30 minutes to make, a minor investment in your major goal of increasing the support of existing contributors.  You don't want to treat all recipients of your message the same if their current level of interest and support is different ... differentiate your message to make them more meaningful.

Once this is mastered (or perhaps at the same time) do additional segmentation of current contributors based on level of support and engagement and create additional messaging and communications (both in content and form) that match appropriately.

And don't just make this a staff responsibility. While we often draw board members into making the ask, we less frequently involve them in "making the thanks." One of the most fulfilling 15 minutes I've had as a nonprofit board member was when we took time at a board meeting to each do a handwritten thank you note to a donor who had been especially supportive of our current efforts.

So the strategic question if you want next year to be one of greater friend-raising and fundraising is this: how might we make our appeals more appealing and what systems and processes must we create to do so with a consistent level of quality and timeliness?

Now go get to work. Those 360 days will go by quickly.

P.S. Some of you might be asking yourself if this is really such a big deal: don't donors support the cause/organization and not their communication practices? Absolutely, and if you weren't competing for time, interest, attention, and money any list management or communication issues might be more easily overlooked.  But you're not. You're one of many. And more importantly, segmenting lists and messages suggests a level of operational intention and attention that may inspire donor confidence.

You Can Find Me Talking Online